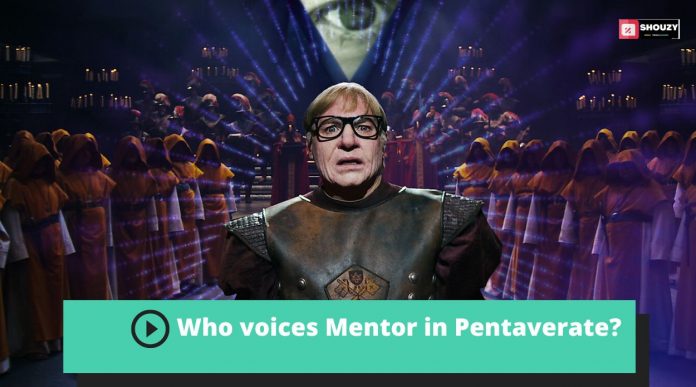 Conspiracy theories are always a welcome source of entertainment for the masses. It distracts us from the commonality of life and gives us something to awe and wonder upon. Pentaverate is one such show that depicts conspiracy theories. Recent searches about the show include ” What is Mentor” and “Who voices Mentor.” You have asked this question, and we are here to provide an answer to this. So keep reading on.

Mike Myers’ Pentaverate is a Netflix comedy streaming television miniseries. Conspiracy theories from his 1993 film inspired the show, So I Married an Axe Murderer. The series, which consists of six episodes, premiered on May 5, 2022.

Conspiracy Theories rule the premise of the show. Five men have worked tirelessly to influence world events for the greater good since the Black Plague in 1347. One unlikely and out-of-place Canadian journalist finds himself in the middle of a mission to uncover the truth about the secret society and, in doing so, save the world.

Dr. Hobart Clark, the Pentaverate’s newest member, is introduced to the secret society for the first time. Older members inform the astounded Dr. Clark that MENTOR is a supercomputer that houses all of the Pentaverate’s ancient knowledge. MENTOR, represented by a triangular screen with a single eye inside, is a computer with a soul. As a result, it is much more than a computer and, in essence, a living being with a personality.

Of course, the show’s biting comedy isn’t far behind, and MENTOR, sadly, has the soul (and thus personality) of a crude Bostonian. Therefore, MENTOR is primarily an irritable assistant who grudgingly assists the Pentaverate and regales them with shockingly lousy language. More information about the supercomputer is revealed as the show progresses. It was created by the late member Jason Eccleston, and because of its enormous computing power and knowledge, MENTOR can effectively control all information on the internet.

MENTOR ends when Ken is chosen to provide the supercomputer with a new soul. The foul-mouthed original soul is exterminated, and the overly lovely Canadian journalist merges with the supercomputer to form KENTOR. Interestingly, MENTOR’s appearance is a replica of the Pentaverate logo. It also refers to The Eye of Providence, a symbol long associated with conspiracy theories and hidden societies such as the Illuminati and the Freemasons. Gregory Hoyt is the actor who plays Mentor in The Pentaverate. Mentor was created in the series by Jason Eccleston (Mike Myers), a deceased member of The Pentaverate. According to the Wicked Local, Gregory isn’t a supercomputer in real life, but he is from Amesbury, Massachusetts.

Mentor appears in each of The Pentaverate’s six episodes. Mentor is a more important character in The Pentaverate’s overall plot than his comedic introduction in Episode 1. Jason created Mentor as a bulwark against the flood of fake news on the internet.

Naturally, one of The Pentaverate’s other members decides to sell Mentor to the highest bidder for his nefarious purposes. Bruce Baldwin (Mike Myers) tries to persuade the bidders that if they buy Mentor, they will be able to create their own version of reality.

What else has Gregory appeared in besides ‘The Pentaverate’?

According to the Wicked Local report, Gregory’s first significant film role was in the 2011 film, J. Edgar. According to Gregory’s IMDb page, he had already appeared in several television series before the film, playing everything from a farmhand in Hart of Dixie to a referee and umpire in Greek.

Gregory’s career did not suffer due to his appearance in J. Edgar. In the comedy web series Panske & McShane, he portrayed McShane. The actor also played the title character in Klaus, a 14-episode short film series.

According to Actors Access, Gregory has also appeared in several stage productions and improv shows. Some of his most memorable stage roles include Jaques’s production of Shakespeare’s classic play As You Like It, Seth Laurie in The Engine of Our Ruin, Kurt in Drunk Talk, and others. Since his debut in J. Edgar, the actor has appeared in several films.

I hope this article on ” Who voices Mentor” was helpful. Stay tuned for more!