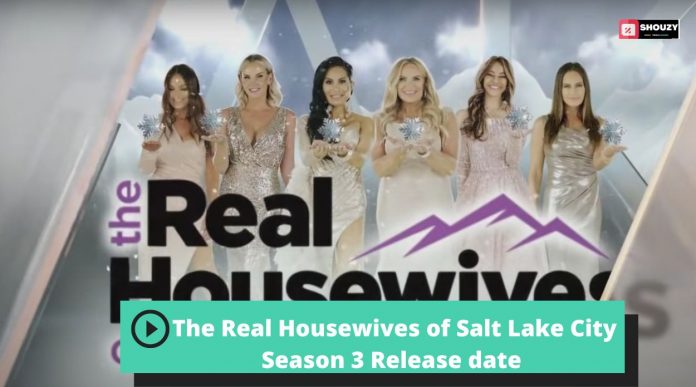 Who doesn’t love a high-profile controversy or a fight? This is where Reality television shines. The Real Housewives of Salt Lake City got the viewers’ attention just by this principle. The show is basically about Jen Shah’s legal troubles with the FBI, and fans love the drama surrounding it. Recently, The Real Housewives of Salt Lake City Season 3 Release date has been announced, and fans are ecstatic.

Here is everything we know about The Real Housewives of Salt Lake City Season 3 Release date. So, keep reading on.

What Is The Real Housewives of Salt Lake City Season 3 About?

What Is The Real Housewives of Salt Lake City Season 3 Release Date?

Bravo Network is known for its late announcement of its series. The same was true for this, as the network announced the renewal of RHOSLC a month before the season’s launch. The RHOSLC Season 3 will be released on Wednesday, September 28, at 9 p.m. Assuming Bravo’s recent pattern, the latest episodes will be available on Peacock the day after they air on Bravo.

Cast Of The Real Housewives of Salt Lake City Season 3

“Jen Shah is leaning heavily on her friends and family for support in the middle of an ongoing legal battle,” according to the press release. “When the dynamics of the group shift, Jen’s new alliances cause a schism among the women.” Jennifer, along with her husband, Sharrieff, have downsized their home as they contemplate their future.

Jennifer kept her tease for the new season simple by posting a photo of her cast and commenting with several heart emojis. Maybe we will see some emotional moments this season.

The press release states, “She is still dealing with the hurt caused by Lisa’s salacious rant. However, Meredith Marks is standing by her new, unexpected support system and is leaving friends-turned-foes in the past. “Although tensions in the group are rising, Meredith is devoting her energy to things close to her heart. She has hosted a fashion show to raise mental health awareness.”

Meredith recently posted a photo of herself in the cast on Instagram, captioning it, “I don’t crack under pressure, like a diamond. “

“Lisa Barlow’s relationship with one of her best friends has been forever changed after a hot-mic moment landed her in hot water.” according to the press release. “Even though many of her friendships are in jeopardy, she finds an unlikely ally in the group of women. As rumours about Lisa circulate, she focuses on her husband, children, and business.”

“I’m a housewife.” This was Lisa’s comment about the new season, which she shared on Instagram alongside her cast photo.

“Heather Gay is constantly working on her upcoming memoir, Bad Mormon, about her experience with religion and community, as well as stepping out of the Church’s shadow to form a non-denominational choir,” according to the press release. Her friendship with Jen is getting stronger than ever, but cracks appear in the friendship with one of her longest and closest friends.”

Heather also shared a cast photo, a reminder to pre-order her book, which will be featured in Season 3, and a joke about a moment that reminded her of Kim Kardashian’s Met Gala look.

“Whitney is on a spiritual healing journey to work through her past traumas,” according to the press release. She has unearthed several suppressed childhood memories during this process. Whitney Rose is ready to sever all ties with the Mormon church. This is to reclaim her authority and independence. Whitney grows closer to an unlikely Housewife while on the outs with old friends.”

“There is only one Wild Rose,” she wrote on Instagram alongside a photo of her cast.

On August 31, E! debuted the Season 3 trailer of RHOSLC on August 31 on E! It is FIRE! The new trailer begins with Jen declaring, “I’m innocent,” only to build up to her eventual guilty plea, but Jen’s legal issues aren’t the only topic of discussion in Salt Lake City. Whitney discusses her “very abusive situation,” while Heather shows off a black. She teases that “maybe somebody” popped her in the face, as Lisa Barlow described it. Most surprisingly, Meredith accuses her former BFF Lisa of doing “favours” to get her Vida Tequila brand into stores. Clearly, the SLC Housewives are still at odds.

Why Is Jennie Not Returning For RHOSLC Season 3?

Jennie was fired in January after several of her racist Facebook posts resurfaced online. Jennie made a public apology for sending messages calling Black Lives Matter activists “thugs” and making light of police brutality. However, Bravo “ceased filming” with her. This was confirmed in a January 25 Instagram statement that she “will no longer be a cast member” of RHOSLC. This seemingly confirmed reports that Jennie had already begun filming Season 3.

I hope you got all the info about The Real Housewives of Salt Lake City Season 3 Release date. Stay tuned for more!