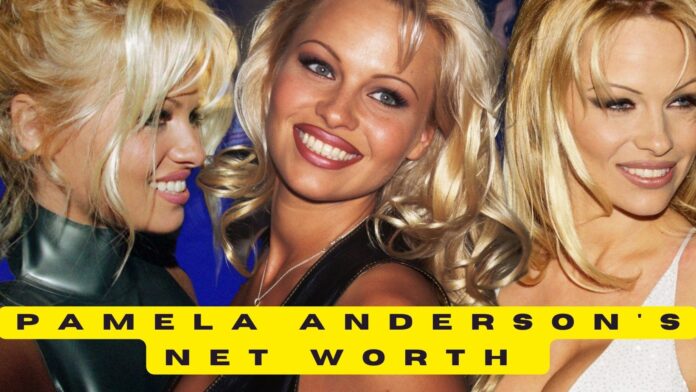 Pamela Anderson is a Canadian-American actress, producer, glamour model, author, animal rights activist, and former showgirl. Pamela Anderson has an estimated net worth of $22 million as of 2022. She first became internationally recognized after appearing on the hit series “Baywatch” and her marriage to Tommy Lee, the Motley Crüe drummer.

Pamela Denise Anderson was born in Ladysmith, British Columbia, Canada, which is on Vancouver Island, on July 1, 1967. She was born on the 100th anniversary of Canada’s official founding. She received some recognition due to being a “Centennial Baby.” Her father, Barry, was a furnace repairman and her mom Carol worked as a waitress.

Anderson was constantly sexually abused by a female babysitter from the age of six up to 10 years of age. She was raped at 12 by a man 13 years older than her, and when Anderson was 14, her then-boyfriend and six of his friends gang-raped her.

Anderson graduated high school in 1985. In 1989, she moved to Vancouver to work as a fitness instructor while pursuing a modeling career. Her first professional modeling job was for Labatt Beer, a Canadian company, in the same year.

Pamela Anderson’s picture was published on the cover of the October 1989 issue of Playboy. Currently, Anderson has appeared on more Playboy covers than anyone else ever, with her magazine career spanning three decades.

In the early 1990s, Anderson landed several guest-starring roles on several sitcoms. From 1991 to 1993, she played Lisa, the Tool Time Girl, on the show “Home Improvement.” However, it was her role as C.J. Parker on “Baywatch” in 1992, which made her not just a superstar, but a household name. “Baywatch” was on the air from 1992 until 1997 with a total of 76 episodes.

In 1996, Anderson starred in the movie “Barb Wire” in the lead role and won a Razzie Award for Worst New Star for her work on “Barb Wire.”

In 1998, she starred in the T.V. series “V.I.P.” till 2002. In 2005 she appeared in the series “Stacked.” For three consecutive years. In 2006, she made an appearance in “Borat: Cultural Learnings of America for Make Benefit Glorious Nation of Kazakhstan.”

In 2017, Anderson played in the mini-series “Sur-Vie” and the “Baywatch” movie starring Dwayne Johnson, Zac Efron, and Alexandra Daddario.

Anderson had breast implant surgery, increasing her bust size to 34D in 1990. And again, to 34DD, years later.

Anderson got married to Tommy Lee, on February 19, 1995, after knowing him for only four days. They have two sons: Brandon Thomas (June 5, 1996) and Dylan Jagger ( December 29, 1997). During their marriage, Lee was arrested on Domestic Violence charges. He was sentenced to six months in jail for spousal abuse. They divorced in 1998.

Soon after the divorce, Anderson got engaged to model Marcus Schenkenberg. They broke it off in 2001.

Anderson then got engaged to Kid Rock and got married on a yacht in late July 2006, and filed for divorce later that same year.

In February 2007, Anderson confessed that she and her ex Tommy Lee still had sex frequently.

On October 6, 2007, Anderson got married to film producer Rick Salomon. On February 22, 2008, Anderson requested the courts that the marriage be annulled. In early 2014, Anderson exposed that she had remarried Salomon. She filed for divorce again a year later.

She was also involved with the founder of WikiLeaks, Julian Assange.

In 2017, Anderson began dating French soccer player Adil Rami. In June 2019, Anderson posted on her Instagram account that she and Rami had broken up.

Anderson got married to Hollywood producer Jon Peters on January 20, 2020. On February 1, 2020, only ten days later, Anderson announced she and Peters had separated. She made a sex tape during her marriage to Tommy Lee that is now infamous in pop culture.

She actively supports PETA and is a vegetarian.

Anderson owns a Mercedes, Porsche, BMW, and many more cars in her collection. She paid $1.8 million for a home in Malibu in 2000. She tore down the previous house and renovated it, spending $8 million on the new modern structure. The home was listed for sale in 2013 for $7.75 million. After being unable to find a buyer, she listed the house for rent for $50,000 per month in the high season. On March 4, 2021, she again listed this home for sale for $14.9 million. Finally, in August 2021, she sold the house for $11.8 million.