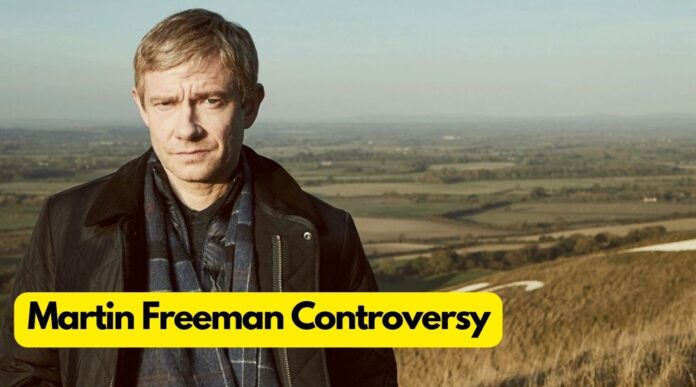 Martin Freeman Controversy: Martin John Christopher Freeman is an actor from England. He has received an Emmy Award, a BAFTA Award, and a Screen Actors Guild Award. Freeman has been nominated for a Golden Globe Award, among other honors.

It’s always terrible when your favorite actor stumbles and says something inappropriate and creates controversy. That’s the case with Martin Freeman.

We are not saying he is a rude person. Still, when he’s not being downright offensive, he’s a hilarious person, a little charming, and delightfully sarcastic, so there is no particular reason to dislike him other than his offensive humour. If this were his first transgression, we could justify it by blaming it on exhaustion from so many press junkets or just blaming it on a terrible split-second decision with an unpleasant question.

Also Read: Lucas Cruikshank Net Worth 2022: how the personality is spending his money

Unfortunately, this isn’t the first time Freeman’s humour has misled and insulted big groups of people. It’s becoming a recurring pattern that many people find impossible to ignore.

His most recent blunder includes a date rape joke made during a Hobbit interview. He was asked which race he would prefer to sleep in The Hobbit. He responds with a somewhat meandering response about elves, drugs, and “rape”.

“I have medicines.” I mean, I could make them. Fill their goblet with something. Someone is going to be outraged by it now! Because they’ll name it RAPE or something. But, you know, it’s a helpful hand for me.” He then says, “Perhaps I should quit talking.”

Raping someone is never a thing to joke about. Drugging someone to take sexual advantage of them is rape, and trying to disguise it as anything else is blatantly disrespectful. Even saying the word “rape” might trigger some survivors, and it’s not something to laugh about. The only saving grace is that he appeared to recognize that what he did was highly insulting and attempted to apologize.

Unfortunately, it was far too late, as this added to his already colorful history of foul comedy.

In another incident, Freeman has admitted to smacking his children and swearing at them, referring to them as “little f***ers.”“One of the commandments is, don’t smack your kids or call them little f******,” the actor, who has two children with Amanda Abbington, stated. “However, I have done both.”

“I’ve probably smacked them twice, but I’ve called them little f***ers more than twice,” he told The Times. “I know I shouldn’t do it, but there are so many representations of how [parenting] has to be perfect that it makes people feel horrible.”

“Because it’s not brilliant.” I mean, it’s the best thing I’ll ever do. But that doesn’t mean it’s not difficult. Do you only ever rationalise this with a toddler? Sincerely, best wishes. If you can accomplish that, God will be with you. Amazing.”

Freeman went on to say that the smacking and swearing occurred when he was struggling to “rationalise” with his children or when he was feeling “impatient” or at the “end of my rope.”

Martin Freeman Controversy: “It’s not a good idea to smack your children,” he remarked. “But you’ll make mistakes at some point, and your children will wonder why 20 years later. It’s unavoidable. And with smacking – I’m not proud of it, but I did it. It’s not a policy, in my opinion. And I’m going to do it again!”

The Children Act of 2004 makes it illegal for a parent or caregiver to smack a kid unless it is “reasonable punishment.”Dame Esther Rantzen, the founder of the ChildLine charity, responded to Freeman’s remarks, telling The Times, “I’m sorry to hear that because I know you care about children, but I don’t think this is your greatest hour.”

Freeman was speaking about parenting concerning his new sitcom Breeders, in which he plays an angry father.