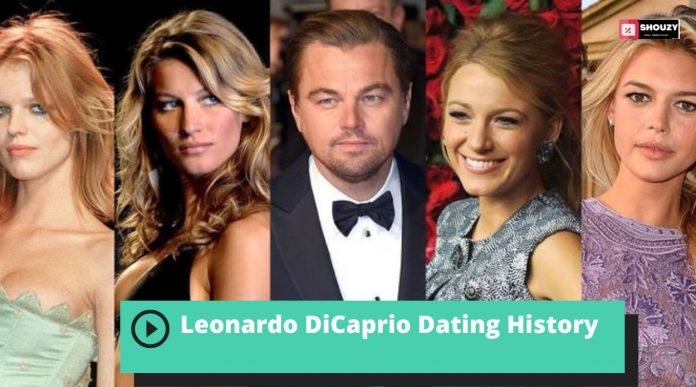 Leonardo Di Caprio has become famous for his dating history as his preferences are a bit young for his age. The veteran actor has been mocked for breaking up with all of his partners as soon as they turn 25. This has made Leonardo have his fair share of women in his life. In fact, he has been with many people’s share in his life! Leonardo DiCaprio Dating History is extensive, and fans want to know about his ex-partners. You will get to know all about his exes in this article.

Leo has had a voracious appetite for younger partners. Ricky Gervais mocked him at the Golden Globes, saying, “Once Upon a Time in Hollywood is nearly three hours long. Leonardo DiCaprio attended the premiere; by the end, his date was too old for him.”
We bring you the extensive list of DiCaprio’s Ex-lovers. Keep reading on!

Since he launched his movie career, the model was the first woman to be linked to DiCaprio.

In 1996, they played Shakespeare’s famous young lovers Romeo and Juliet in the Baz Luhrmann-directed film. Although it was never confirmed that the costars had a real-life romance, there were reports that the two had chemistry on set.
Also Read: Are Bella Thorne Lesbian Rumors True?

Leo dated the Michigan-born model from 1996 to 1997 and invited her to the Romeo & Juliet premiere in Los Angeles.

DiCaprio reportedly saw the Arizona-born model in a magazine after Titanic catapulted him to worldwide fame and had his reps track her down.

DiCaprio had a brief romance with the Danish beauty around the time Titanic’s release in 1997.
Also Read: Kylian Mbappe Dating: Are the Rumors True about his Transgender “Girlfriend?”

There were high speculations in the late 1990s that DiCaprio was involved with the model-actress daughter of Aerosmith frontman Steven Tyler after party photos surfaced.

Following the release of Titanic, he had a brief affair with the supermodel. Following that, the pair remained close friends and have seen yachting and eating lunch together worldwide.

DiCaprio first met the Czech supermodel at the Man in the Iron Mask premiere in 1998. According to sources, the two had a two-month affair.

On his 2000 flop The Beach set, he met the French actress. They played lovers in the film, and according to reports from the set, their movie-set magic briefly came to life.

From 2000 to 2005, the actor and the Brazilian supermodel were in a five-year relationship. The stars had many interests in common, such as sitting courtside at basketball games and raising awareness for environmental causes. DiCaprio walked the Oscar red carpet with Bündchen on his arm in 2005.

After meeting at a concert in Las Vegas in 2005, the couple’s on-again, off-again romance lasted from 2005 to 2010. The couple travelled together worldwide, and Refaeli even took DiCaprio and his mother, Irmelin Indenbirken, to Tel Aviv to celebrate the actor’s 36th birthday.

During a break from Refaeli, the Titanic star had a brief affair with the swimsuit model. In 2009, the ex-lovers were spotted getting close while hanging out on a yacht in Ibiza.

At the 2011 Cannes Film Festival, the two met aboard Steven Spielberg’s yacht in Monte Carlo. Even though their relationship lasted only five months, the couple was photographed on romantic dates in Venice, Los Angeles, and New York.

The Wolf of Wall Street actor dated a Victoria’s Secret model for ten months before the couple split in 2012.

DiCaprio first appeared with Garrn at the 66th Cannes Film Festival in 2013, adding to his long list of model lovers. They separated the following year.

DiCaprio and the Sports Illustrated model, who are 16 years apart in age, split in 2016 after a few months of dating. They are still friends and talk, but their relationship is over.”

In 2016 that DiCaprio was dating the Danish model, 17 years his junior. They were together on vacation in Montauk, New York, and the Bahamas. The couple split up in 2017.

In 2017, the Wolf of Wall Street actor sparked dating rumours with the model. They have since travelled the world together, visiting cities in the United States, such as Aspen, Colorado, and Miami, as well as countries such as Italy and France.
In 2020, DiCaprio and Morrone adopted three huskies.
After four years together, the couple announced their separation in August 2022. “DiCaprio has been attending events and vacationing without Morrone, from the Care Gala to the Unicef Gala to Saint Tropez,” a source reported. “He’s been spending more time with all of his friends.”
This concludes the extensive list of ex-partners Leo was involved with. I hope you liked this article on Leonardo DiCaprio Dating History. Stay tuned for more!