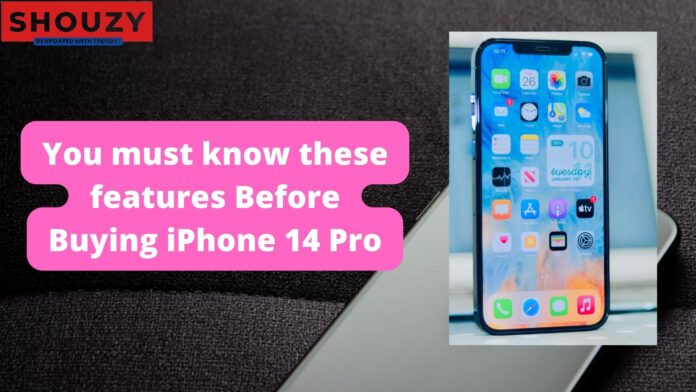 With a probable design that differs noticeably from the iPhone 13 Pro, Apple’s iPhone 14 Pro is expected to be the device that shakes up the iPhone lineup. The speculations have so far made several suggestions, including the demise of the notch and an always-on display.

It appears that Apple will need to bring its A-game to the iPhone 14 Pro in the face of fierce competition from devices like the Samsung Galaxy S22 Ultra and the Google Pixel 7. And Apple certainly seems to be doing precisely that, with a speculated new 48MP primary camera and a potent new A16 Bionic CPU that the standard iPhone 14 may not get.

Apple iPhone 14 is likely to launch next month.

In September, which is the next month, Apple will probably introduce its newest iPhone 14 series. The 2022 iPhone 14 event is anticipated to take place on September 13, while the firm hasn’t yet announced the precise date. Maybe the case is because Apple typically announces new iPhone models around the first or second week of September. If the company plans to introduce the smartphone next month, it should disclose the launch date within the next few days or weeks.

Somewhat trustworthy leaker Leaks Although ApplePro asserts that three of the four iPhone 14 variants are expected to see price increases, this is undoubtedly just a rumour. It’s a rumour that many people are buying onto because a later source also asserts that an iPhone 14 Pro price increase is on the horizon.

These speculations claim that the iPhone 14 Pro will cost $1,099 at launch, $100 more than the iPhone 13 Pro’s starting price of $999. Likewise, the iPhone 14 Pro Max price could rise by $100 to $1,199. Anyone trying to obtain a high-end next-generation iPhone 14 would undoubtedly feel the pinch from this significant jump in the launch pricing.

Apple is removing the notch from some iPhone 14 models, and rumours suggest that the notchless design will be limited to Pro models.

Rather than a notch, Apple will use a smaller set of cutouts on display. Initially, rumours suggested that Apple would introduce a single circular hole-punch cutout to accommodate the front-facing camera, but subsequent information indicates that Apple will likely add two.

According to other reports, the rear camera module will also grow. According to Apple analyst Ming-Chi Kuo, the reason for this is that a more extensive module is required to house a 48MP camera. As a result, according to another leak, the corners of the iPhone 14 Pro (but not the Pro Max) will be rounded to match the curved corners of the new module.

According to rumours, Apple will finally go the USB-C port route with the iPhone 14 Pro, which makes sense given that many of its devices already have USB-C connectivity. According to recent rumours, Apple will continue to use Lightning over USB-C, but with updated Lightning ports that support faster USB 3.0 data transfer. The EU is on the point of making USB-C the standard charger for portable devices like phones.

Type – c on the iPhone 14 Pro would be a must-have feature for some. The Lightning connector is arguably the worst aspect of the iPhone, as it can wear out over time. This can make charging your phone difficult. Unfortunately, given how established the standard and its ecosystem of accessories are, Apple is unlikely to abandon Lightning unless forced.

Meanwhile, Apple is expected to switch to USB-C for the iPhone in late 2023. If he’s correct — and a new Bloomberg report suggests he is — it means we won’t see an official USB-C iPhone until the iPhone 15.

A 120Hz dynamic refresh rate display was one of the most significant upgrades delivered by the iPhone 13 Pro. When a fast refresh rate was required, an LTPO panel allowed the screen to go from 120Hz to as little as 10Hz, which helped save battery life.

According to rumours, the iPhone 14 Pro could build on this and scale down to as little as 1Hz, reducing display power drain. It could allow for the reported use of an always-on display. Bloomberg’s Mark Gurman claims the iPhone 14 Pro will finally get an always-on display, showing “The lock screen displays “weather, calendars, stocks, activities, and other data.” The low refresh rate helps to preserve battery life.

The revamped iOS 16 lock screen, which Apple previewed in June, appears to set the stage for this feature, with new findings indicating that the entire lock screen, not just regular widgets, will appear on the AOD.

The standard iPhone 14 models will have a 90Hz display, which would be an improvement over the iPhone 13’s 60Hz but not entirely on par with the Pro phones.

The number of cameras on the iPhone 14 Pro is unlikely to change significantly, as the Pro phones are expected to retain the standard configuration of a main, ultrawide, and telephoto array. Given how frequently Apple phones appear in our list of best camera phones, this is not bad.

However, one leak suggests that the iPhone 14 Pro will feature a 48MP primary camera, a departure from the 12MP cameras that Apple has used for decades. While computational photography in Cupertino is among the best in the world, having more megapixels to work with would likely give the iPhone 14 Pro more scope for processing light and details; we may have reached a point where megapixels matter once again to Apple.

No changes have been announced for the ultrawide camera, but we wouldn’t be surprised if they made some effort to improve the field of view and remove some edge distortion.

There’s also the possibility of a zoom boost for the telephoto camera, as an Apple patent suggests the company is working on a periscope-style zoom camera. If such a feature were to be introduced in an iPhone, it would be with the iPhone 14 Pro.

Because of poor sales, Apple is discontinuing the “mini” line in 2022, so there will be no 5.4-inch iPhone. The iPhone 13 mini was the last of the mini phones, with Apple focusing on larger-sized iPhones ranging from 6.1 to 6.7 inches for its flagship devices.

Apple has previously used the same colour for the standard iPhone and Pro models, but in different shades, so if the purple rumour is authentic, that could be what we see in 2022.

According to a JP Morgan Chase investor report, Apple’s upcoming iPhone 14 Pro models may feature a high-end titanium alloy chassis design. Apple has previously used titanium for the Apple Watch, but this would be the first time using the material for an iPhone.

Titanium is more scratch-resistant, robust, and corrosion-resistant than steel and aluminium, but we’ve heard nothing more about a titanium option, so it appears unlikely.

Read more: How to Make Ragdoll In VrChat – Stepwise Explained

Following on from the A15 Bionic, we’d anticipate an A16 Bionic chip in the 14 Pro series, with improved performance across the board based on alleged benchmarks.

However, many rumours say the iPhone 14 will stick with the A15 Bionic chip, creating a gap in the model’s core specs. It would be a first for Apple, as new iPhones have always come with upgraded silicon.

That may not be bad because the A15 Bionic is still a powerful chip that can handle almost any smartphone task. So we deliberated what the A16 could bring to the table to justify purchasing an iPhone 14 Pro over a standard iPhone 14.

Storage is likely to increase to 1TB, but no solid storage rumours for the iPhone 14 Pro have emerged as of yet.

The iPhone 13 Pro Max lasted 12 hours and 16 minutes, and we expect the iPhone 14 Pro Max to endure the same or longer as Apple improves chip and phone efficiency.

Regarding 5G, we anticipate that the iPhone 14 Pro will use a new, more minor 5G modem chip. Because of the smaller size, it should require less power to run, and there may be extra space for the battery to expand. That can improve the iPhone 13’s impressive battery life.