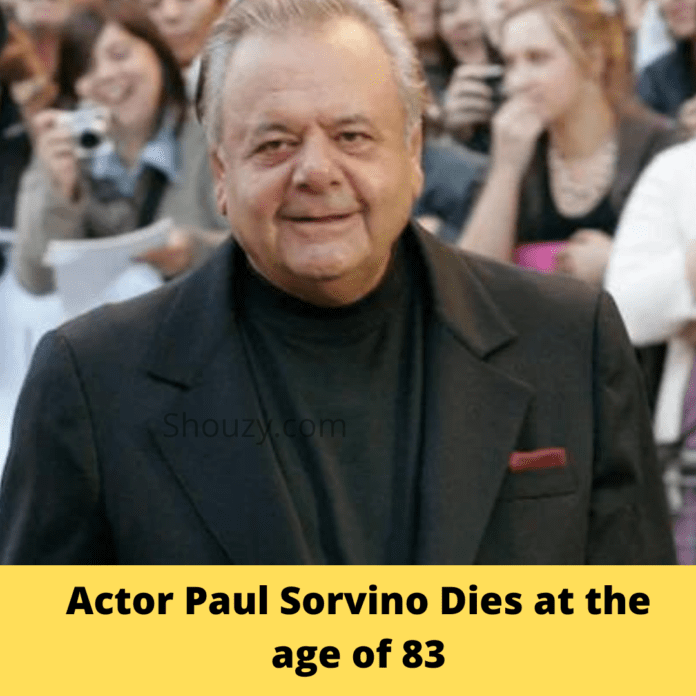 Paul Sorvino, the famous actor with the speciality of playing thieves and cops like Paulie Cicero in the movie “Goodfellas” and NYPD Sergeant Phil Cerreta in the series “Law & Order,” has died. He was 83 years old.

His publicist, Roger Neal, said that Paul Sorvino died on

Monday morning in Indiana due to natural causes.

Paul Sorvino was conceived in Brooklyn, New York, in

1939. his mother, Angela Maria Mattea, led him to play the piano, and his father, Ford Sorvino, worked in a dress factory. They were an Italian immigrant family.

Academy of Music and Drama, where he began his career as a

copywriter at an advertising agency. He attended voice lessons for 18 years.

While attending the American Academy of Music and Drama,

he decided to go into the theatre as he fell in love with drama. He was very into music from a young age.

Dee Dee Sorvino said, “Our spirits are broken; there will never be another Paul Sorvino; was the love of my life and one of the unique artists ever to live. He was a good husband, a best friend, a father and a brother. I will always

Paul and Dee Dee Sorvino were an inseparable couple. Dee

Dee was his greatest supporter.

Paul Sorvino and Dee Dee married in 2014 at the Lincoln

Center in New York. They met in 2013 when both appeared as guests on an episode of Your World With Neil Cavuto. Dee Dee also had a political career behind her, as she previously worked as an assistant to former President George W. Bush. She seized the seat after me, and I went crazy as soon as

I saw her,” the opera singer told in January 2015 about meeting Dee Dee.

“She was wearing an amazing blue dress and had an

After the wedding, the couple decided to write a cookbook

together. In 2017 the couple wrote Pinot, Pasta & parties.

Cicero and his Italian roots with a series of Italian recipes.

In more than 50 years in the entertainment

industry, Paul Sorvino has been a primary focus in movies and television,

Valentino in “The Rocketeer.”

He often said that although he might be best known for

playing gangsters, his true loves were poetry, painting and opera.

A Touch of Italy –

After long conversations with Paul Sorvino, his friend,

Italian cuisine at the Bolzano centre with some company associates.

The actor was honoured by Mayor De Magistris with the

city coat of arms and welcomed by President Rosetta D’Amelio.

She presented the couple with a valuable book about

Pompeii and an artistic ceramic artefact designed for the regional coat of arms.

On the last day of Sorvino’s stay in Naples, the opening of the Teatro San Carlo in Naples ended with an amazing room. Paul Sorvino will surely remember this trip and the Italian welcome, especially the Neapolitan one.

His enthusiasm, commitment and love for his Italian heritage and the emotions he experienced during his stay made him an excellent representative of Italian cuisine at the table in the USA.