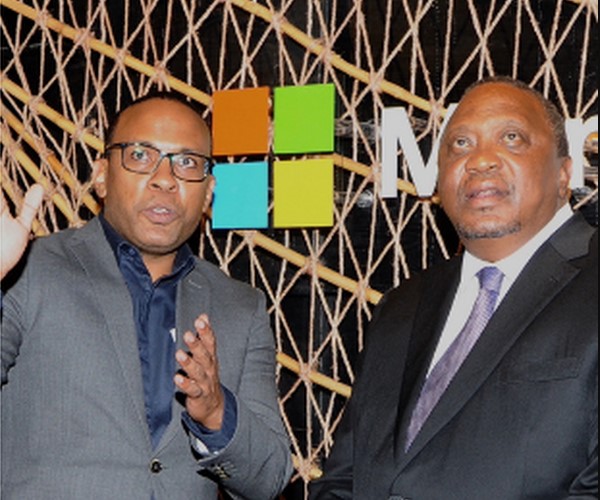 President Uhuru Kenyatta on Thursday evening unveiled the Microsoft Africa Development Center, expressing optimism that the facility will help the government’s efforts to secure high-tech jobs in the digital space for Kenyan youth.

At the event’s launch, President Kenyatta described the Microsoft facility in Nairobi as a “seminal development,” and he called it proof that Kenya’s abundant high-tech workforce, business opportunities, and investment-friendly environment have gained international recognition.

In his remarks, President Kenyatta said, “As Microsoft’s premier research and development centre, we all remain confident that you — together with our young men and women — will build a local world class talent and create innovative technological solutions that will yield global positive impacts.”

The facility, which is one of the continent’s largest software engineering facilities, sets the bar high for future technology hubs on the continent.

As technology takes centre stage in the global economy, “tonight we are again shattering yet another glass ceiling and once again cementing Kenya’s place as Africa’s leading technology powerhouse,” President Mwai Kibaki said, per the BBC.

Additionally, he mentioned that Microsoft has worked with local universities and start-ups to provide training and skills that will help create job opportunities for over 200,000 young Kenyans in support of the digital economy, saying that Microsoft has become a strong and true partner to Kenya since opening an office in the country.

As a result of the partnership between the Kenyan government and Microsoft, 431 full-time jobs have been created for Kenyans in the fields of software development and programme management, technical design, content writing, operations, research, and applied science.

According to President Kenyatta, “Microsoft has strengthened research, technology, and skills through projects such as “Mawingu,” which connects the unconnected, and the “one million farmers platform,” which improves crop yields.

In addition to the self-heating windows, a mini solar plant, and a water treatment facility to recycle and purify the facility’s water, he appreciated Microsoft’s support for the use of sustainable energy sources at the newly unveiled development centre.

Because of the rapid advancements in technology, President Kenyatta says the country has begun to see the benefits of its decade-long investment in information and communications technology infrastructure.

A dignified, digital-driven future of work opportunities in fields such as block chains, artificial intelligence, remote work, online marketplaces, and new national and global e-business opportunities is now possible thanks to sustained investments in the ICT sector, according to the President.

Mr. Mucheru lauded the president for creating an environment that has allowed the economy to grow at an unprecedented pace.

Is this really an election year, given that we’re here launching a Microsoft Africa Development Center just four months before the polls open? Our growth and development have been facilitated by your message of peace and by the handshake you gave us as a gesture of friendship, “Mr. Mucheru said.

She noted that the centre has already employed more than 450 engineers in Kenya, as well as 500 employees in other regions.

“We have already surpassed the 500 engineers we originally pledged to hire by 2023. Today, the Africa development centre employs about 570 engineers working on identity and network access, mixed reality, Microsoft 365, as well as connected services and experiences, “she said.